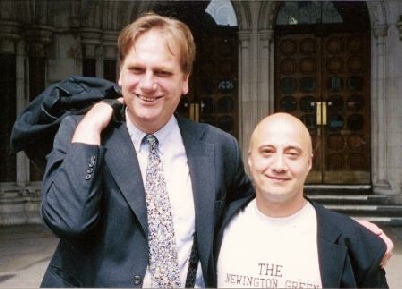 In 1996 Erkin Guney was sentenced to 14 years in jail for the alleged possession of a firearm and heroin. An appeal against this conviction was rejected in 1998.

In May 2003 the Criminal Cases Review Commission referred the case to the Court of Appeal. Erkin's conviction was quashed based on evidence of police corruption.

(Right) Erkin Guney and Tim Greene outside the Royal Courts of Justice following Erkin's release, 23 May 2003

Tim Greene, Erkin Guney’s solicitor said afterwards, “The court decided to protect the police, rather than tell Mr Guney why he spent seven years in jail for something he didn't do.”

Below we reproduce a copy of the judgment.

You can read the full story behind this miscarriage of justice in “Untouchables”, the recently reprinted book by Michael Gillard & Laurie Flynn. This is available as a Kindle e-book (£3.99) and as a paperback (£24.99).

IN THE SUPREME COURT OF JUDICATURE

(Transcript of the Handed Down Judgment of

Official Shorthand Writers to the Court)

Mr David Jeremy for the Crown

As Approved by the Court

(1) Possessing a firearm without a firearms certificate:

(2) Possessing ammunition without a certificate:

(3) possessing a controlled drug of class A (heroin) with intent to supply.

In reliance on the Statement of Reasons counsel for the appellant has drafted grounds of appeal which are inevitably lacking in detail because counsel has not had access to the Confidential Annex, but counsel for the Crown, Mr Jeremy, has had access to the Confidential Annex and, having given careful consideration to the matter he and those instructing him have come to the conclusion that it can no longer be argued on behalf of the Crown that the convictions are safe.  The reasons for that conclusion are set out not only in the two documents from the Commission but also in the Crown's written response to those documents, which is itself a sensitive document which has been made available to the court, but not to counsel acting on behalf of the appellant.  When this matter was first listed before us on 15th May 2003 we expressed our agreement with the Crown's conclusion, and we therefore allowed the appeal, for reasons to be given later.  We took that course because we wanted to have  further assistance from Mr Jeremy as to the extent to which we should curtail our reasons in order to protect those who might be endangered if more were to be said.  As Mr Emmerson QC for the appellant submitted in his written note for the hearing on 15th May 2003, it is proper for the court to give as full a judgment as possible consistent with the public interest.  After nearly seven years in prison the appellant is entitled to know, as far as is possible, the basis of the court's decision, and there is an obvious public interest to be served by the provision of a reasoned decision on the merits of this appeal.  But, as was recognised by this court in Doubtfire 19th December 1999, there can be cases where the balance of conflicting interests comes down in favour of revealing very little of the reasoning which has persuaded this court to allow an appeal, and Mr Jeremy has made submissions to us in private designed to persuade us that this is such a case.  We accept the substance of those submissions, as will be apparent from the rest of this judgment.

On 28th September 1995 D.C Stobbs of 3 Area Drug Squad received an intelligence report that the appellant was involved in the distribution of heroin and may have some at his home in Ilford.

At 8.25 a.m. on the following day police officers, with a search warrant, went to the appellant's home.  He was there and said it was "a set up".  In the rear bedroom, used as the main bedroom, nearly £25,000 was found in a cardboard box, hidden under some towels.  The appellant said the cash was his, and he did "some buying and selling off the record".  In the same built-in wardrobe, hidden under T shirts, was found a hand gun with live ammunition in the magazine and three further boxes containing ammunition, so that there were 149 rounds of ammunition in all.  At the top of the wardrobe was a shopping bag containing 5 bags of heroin weighing 4.99 kilos at 58% purity, with a street value of about £750,000.  The appellant said that he knew nothing about the gun, the ammunition or the drugs, and he repeated that it was a set up.  His finger prints were on the shopping bag.

When interviewed at the police station the appellant said that someone could have gained access to plant the heroin, and referred to a long standing dispute with two former business partners, Demetriou and Ramis who, he said, had employed a contract killer to kill him, a matter being investigated by Detective Inspector Scully of the International Crime Branch at Scotland Yard.

It was true that on 13th September 1995 D.I. Scully and D.C. Johnston had arrested Ramis and they had visited his home on 23rd September 1995.

In May 1996, shortly before the trial was due to begin, the Crown ex parte sought and obtained a ruling from the trial judge in relation to material leading to the intelligence report of 28th September 1995.  The effect of the ruling was that further material did not have to be disclosed.  An adjournment of the original trial date was then obtained to enable the Crown to investigate an assertion by D.I. Scully that the appellant was the victim of a "blatant fit up" and complaints made by the appellant's father to the Police Complaints Investigation Bureau.  That investigation resulted in a further ex parte application by the Crown to the trial judge on 27th June 1996 when it was ruled that certain further information should not be disclosed on the grounds of public interest immunity.  There were certain other interlocutory applications to which, for present purposes, it is unnecessary to refer.

The case for the prosecution rested primarily upon the officers who executed the search warrant on 29th September 1995, but two senior officers Detective Inspector Matthews and Commander Ramm were called to deal with the relationship between the appellant on the one hand and Detective Inspector Scully and DC Johnston on the other.

The appellant gave evidence on his own behalf saying that the money found came from his father (not from his own business deals) and called witnesses, including his wife, his father, and the two former police officers (Scully and Johnston).

The reasons which persuaded us to allow this appeal have nothing to do with the conduct of the trial, or the evidence given at the trial, or the propriety of the rulings made by the trial judge on the information then available, so it is unnecessary for present purposes to refer to the trial or its preliminary stages in any greater detail.

The grounds of appeal considered by this court in 1997 and 1998, resulting in the judgement of 27th February 1998 concerned -

(a) the extent of disclosure,

(b) whether it was right to restrict cross-examination of a police officer in relation to other cases, and

The appeal was dismissed and nothing has emerge to cast doubt on that decision, having regard to the information which was available when judgement was delivered.

What has emerged during the course of enquires made by or at the behest of the Commission relates to the intelligence report of 28th September 1995. Substantial doubt has been cast upon the integrity of persons who were then (but are no longer) police officers, and who played an important part in gathering intelligence.  Had the information been available at the time it would have been laid before the trial judge in May 1996 if the Crown was at that time minded to proceed against the appellant.  Had it been laid before the trial judge it seems inevitable that disclosure would have been ordered and that in order to protect sources of information the Crown would have offered no evidence.  Even if the Crown had been prepared to disclose, the trial would have taken such a different course that we cannot say with confidence that the outcome would have been the same.  The reasons which would in May 1996 have motivated the Crown to offer no evidence are still valid.  That is why we can say no more, but we have said enough to indicate what led us to allow the appeal.