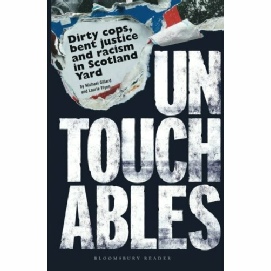 by Michael Gillard and Laurie Flynn

This book is the first expose of Scotland Yard in 30 years. It is the result of a 5 year investigation into Scotland Yard’s most secretive and powerful unit - the very one charged with rooting out corrupt and racist cops.

This book is the first expose of Scotland Yard in 30 years. It is the result of a 5 year investigation into the Yard's most secretive and powerful unit - the very one charged with rooting out corrupt and racist cops.

In 1993 the yard set up the ghost squad, an undercover anti-corruption unit whose existence was known to only a handful of senior officers who operated with no independent oversight. In 1998 these shadowy detectives went public as “the Untouchables”. Their motto: “Integrity is non-negotiable”.

But instead of thorough corruption investigations and prosecutions, there was corruption management; instead of justice and accountability there were double standards and the cover-up of miscarriages of justice.

Based on thousands of official documents, which Scotland Yard hoped would never see the light of day, and hundreds of interviews, Untouchables is an integrity test on the most powerful police force in Britain.

For the first time, police whistleblowers speak out about the hidden failures and cover-ups during some of Scotland Yard’s most high-profile cases, from the still unsolved murders of Daniel Morgan, David Norris, Stephen Lawrence and Damilola Taylor to the prosecution of Royal butler Paul Burrell and the Jill Dando case.

After the Stephen Lawrence scandal, the Government promised a fully independent system of investigating the police. Instead, the Home Office had stacked the new police watchdog with retired law enforcement officers led by the former head of Scotland Yard’s anti-corruption squad.

You can read extracts from Chapter 22 Secret Justice.

You can read a Blog review of this book, anther Blog on the Guney case, and a review by Kevin Blowe (2012)

Here are three video clips about Erkin’s case and the Parliamentary book launch of Untouchables: